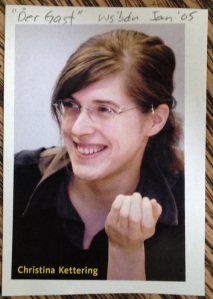 Sitting between two red heads in tight, cramped theater in Wiesbaden Staats Theater. The way it should be, baby.

-ritual
-Wir sind kein… für sozial Fehle…
-Trying to be Komisch but the actors…
-Great stage scenery.
-(The Germans) can’t allow a Scherz, says the internationa bar-man.
-Oh, a great Stück über Germany now!
-Der Mensch wird zu lange von seinen Eltern (gehütet?)
-She falls asleep the middle of everything.
-trying philosophies
-Elternschaft mentioned for second time.
-No more Germany because of coffee um vier.
-When is British tee-time
-Freund Gewählt
-Pretty bad acting
-Schanderer (spell)
-How to talk to a woman
-Rockzipfel
-Ich hab einen Biographie and they go in to it who it’s about.
-Mit diesen clown Lied she set me in a trance
-The woman comes and saves
-Their relationship and how it developed was unclear, I missed it.

Story: portraying late 1940s, early 50s, Europe. A small organization calling itself… is approached because it was heard that they are (the group) anti-communist. They are then given money by a CIA/OSS operative (the man who approached them) and then start partying. The name of the group is an acronym for portraying—finding something greek or latin for party-animal. This is a play about the beginning of the European Union, Pan-Europe, EEC. The western (Anglo-American) fight against communism.