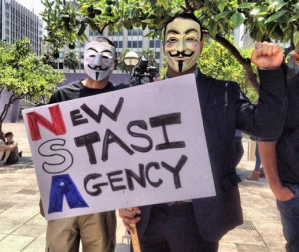 The first protest I ever experienced in Eurowasteland goes back to circa 1986. Was visiting Germanian and happened across a demonstration. Not sure what they were demonstrating against but it really doesn’t matter. After that I found myself seeking out these protests more and more. Reason? What a great way to pick up armpit hairy Euro-chicks. I mean, seriously, I was overwhelmed with milky skinned Fraüleins who would put out at the snap of a confident finger and a male attitude that was opposite of the Germanin mutter-boys they usually had to deal with. No wonder so many girls lost their virginity to southern Euro boys, eh. Nomatter.

So, like, what are people protesting now? Ah, the NSA and the breeching of collective society privacy. Reading through this morns articles on the subject certainly brings back memories. Heck, even some of the girls still wear the same shit they wore a quarter century ago. And all that skin during summer protests is still so milky. The only real difference to so long ago is that now they shave them armpits. What a shame, eh. But I really need to move on.

Here’s the thing. Why is it Germanins come out to protest when they hear that the NSA is spying on them but they don’t do it when their own government has been spying on them their whole lives? Or are Germanins naive enough to believe that their beloved Wohnmeldepflicht (compulsory residence registration) represents something more than just informing beloved Staat where they are getting laid? (Btw, I have seen the dossiers that follow individuals around in this country when they move from one place to another. For someone raised in America, it is a shocking sight.) And what about the way the state requires that Das Volk pay their taxes? Ever cross anyone’s mind that that too is a form of spying? But a more poignant example of how government has been spying on citizens is best found in the fallacy of digital copyright infringement. Why is it that for years certain venal lawyers were able to scam thousands of Germans for exorbitant amounts of cash by accessing their online activity, without permission, in search of “illegal” downloads? That’s right, baby. Private organisations, hell bent on profits and scorn, have vigorously cashed-out because they could easily spy on people who use the Interwebnets.

So here’s the thing protestors. The deal between the NSA and the Germanin government ain’t about you or your silly privacy. That information is already available because you are too preoccupied with a good-time and your fucking beer-halls and having finally figured out how to shave your armpits. But if you insist on protesting — because it fills the boredom — then why don’t you protest the real reason for the NSA. Which means you’ll be protesting against their spying on your corporations, your industry and the various institutions that make up the bureaucratic hell that is Eurowasteland which has given you the gift that keeps on giving: austerity and pacifism.