As mentioned here, I was hungry for more when I finished Isaacson’s book on Steve Jobs. The book really didn’t get into anything down & dirty about the man or Apple, which made it a disappointment. Obviously I’m not alone in wanting more about Steve Jobs and also more about the nit & gritty of the Apple circus. A circus, btw, that the late/great American PT Barnum would/could be proud of. For, as you’all know, America is the land where a sucker is born every minute. Long live and die “designed by Apple in Cupertino”, baby. It’s not only a post-PC world, it’s a world on the brink of perfecting slave labor, debt consumption and living the high-life with grand gadgets. Oh well.

Enter Leander Kahney from Cult of Mac and his new book “Jony Ive – The Genius Behind Apple’s Greatest Products”. Although it’s just joined my reading list, I’m not as yet motivated to move it up in front of the others on the list. But I might get to it around Xmas/New Year or when the Kindle price motivates me more. In the mean time, see the MacBreak Weekly where Kahney is interviewed and presents a few nuggets of what can be expected from this book.

To give you an idear of what worstWriter is interested in go to 30:27 in the above vid. Leo nails it when explaining the design intricacies of the MacPro. I am fortunate to own one of these devices. In fact, to the chagrin of many around the world, I practically stole my MacPro from a retailer last spring. For the longest time this machine had been in a showroom full of marked-down tower PCs. Over a period of a half (or so) year, I watched the store mark the price of it down until it hit €1500 (from €2600). I polished up my balls that day and asked for the department manager. I offered him €1200. He thought for a few mintues, realising he was never gonna sell it when he couldn’t even sell Windows i5 towers that were €1000 or less. And to my surprise, he took my offer. And I assure you, dear worstReader, if I could, and if my wife wasn’t in the way ;-), this device would be in my bed. That’s how friggin beautiful it is. Anyway. 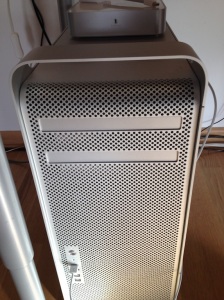 As I was saying, Leo on MacBreak Weekly nails it. Apple, Jony Ive & Co. are obviously obsessed with DESIGN. And as far as I’m concerned, more power to ’em. The detail of milling the front aluminum cover of the MacPro is easy to miss. But the metal bends at the top, which means the milling machines had to cut the holes so that they wouldn’t be distorted when bent for the fit. I know that to many people that means nothing, especially when the heart of this device is based on technology that barely lives for a few years. Still. I have a MacPro. It’s like a tractor trailer on a highway of (Apple) sports cars, but I don’t care. Not only the design detail can be seen in the cheese grater front but just pop open the case. The motherboard, the daughterboard that houses the CPU, the cables, the drive bays, the on/off switch… It’s breathtaking.

But don’t worry. I do have a life. I think. And with that in mind. I digress.

At this point in time & space, and after failing to get a job in the world of industrial design so many years ago, back in the day when I tried to wriggle my way into a work-for-the-man career–I actually had a series of job interviews at Frog Design–I’m very impressed with the career of Jony Ives. And he obviously holds a lot of the nit & gritty about this awesomely influential corporate behemoth that can (almost) print its own money. So if you’re interested keep checking back for a review of yet another book about über-company #1 and the über-people that make it all happen.