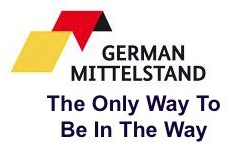 Two things today. One. I hate taxis. Two. As I said here and much worst here, the Germanian concept of Mittelstand is a misnomer. That is, it doesn’t mean what you think it means. The Germanians and those that preach it think the word Mittelstand refers to the small and medium enterprises that supply big industry with both parts and labor. This is inherently untrue. What Mittelstand really means is that there is something that blocks the way. Seriously. It means something like a wall or an impassable object or a guard-rail, a fence, a fat man stuffing his face with sauerkraut standing in the middle of an open Autobahn all because he feels ripped-off that his nation-state doesn’t give him more welfare or government subsidy, etc. In other words, Mittelstand is a barrier. It is a barrier that protects one side of the (life) equation from the other side. It protects the future form the present. It protects the past from the future. It stands in the middle and stops everything that it can’t or doesn’t want to understand. In fact, Mittelstand can be a person or a group of people. It can even be a part of a society. Hence, in Germania, probably the world’s best producer of mass high-end products and technical services, there is no innovation there is only a capitalist version of a Big Brother-like being–standing in the middle making sure that… You shall not pass! Indeed. Mittelstand… middle-man (or the like). Good thing it doesn’t really matter what it’s called. ¶Which brings me to taxis. Did I mention I hate them? In fact, whenever I travel, like most recently to Paris, I will avoid as though they carry the plague, taxis. But sometimes, to my regret–and this I blame on the convenience factor of life that one expects in middle-age because of monetary liquidity–I have no choice but to take a taxi. Or. Let me put that another way. My better half didn’t want to take my preferred form of transport upon arrival at Gare Du Nord, public transport. Seriously. I love public transportation, especially in cities like Paris, London, Berlin, NYC. If I could, if the circumstances warranted it, I would give up not only owning a car but I’d give up my friggin’ automobile driver’s licenses–which I have for two countries. The mess that is modern day traffic astonishes me because it represents the best of inhumanity and the behaviour that will be all we leave history. ¶Enter Uber and my worst-thought of the day, dear worst-reader. When I first heard of Uber I thought: Ok, why didn’t I think of that. Then I got the app, started fiddling around with it and, well, as of most recent travel, I still haven’t used it. All I’ve done is heard/read about it. And I’ve concluded: I still hate taxis and Uber is a taxis service. Of course, I don’t hate Uber in the way I hate Parisian taxis. Just recently, when we were in hurry because of some last minute shopping or something, we spontaneously grabbed a taxi to take us to the train station. The typical taxi bullshit ensued. “Oh that’s too short a trip.” “Let me call you another taxi.” “Sir (taxi driver), you’re going the wrong way and I’m not paying you for this detour.” “Sir (taxi driver), would you please take the fastest route to our destination.” Etc., etc. ¶So here’s what Uber does that potentially could make me not hate taxis anymore. It literally gets rid of the Mittelstand bullshit that is a/the sickness of (a) society. And that’s ok. But here’s what makes me angry at worst, skeptical at best about Uber. The taxi industry is probably one of the best examples out there of how government regulation could actually be a positive part of capitalism. Simply put, the taxi industry is heavily regulated in most western countries. It is not heavily regulated because capitalist-pigs got their hoofs in it and want to turn it into a yacht financing arm of whatever else said pigs do. No. It is regulated because (1) it has long since been proven to be a legitimate form of public transportation. (2) Prior to being recognised as a public utility people were being randomly killed by shear negligence. Hence, the day is coming when Uber is going to be called out for its negligence. But with that last statement I make no predictions. ¶Which brings me to the following question: Obviously Uber is something that people want but what is it that they are getting? To worst-moi, Uber is for the first time the best example out there of how technology can also be part of regress and not progress. Uber is employing wild-west tactics disguised as a modern technology service. And people are falling for it. And don’t get me wrong here. That doesn’t mean, I’m against Uber and I’m most certainly not against technology. I’m sure, eventually, I’ll try Uber but I won’t try it because I’m against old school taxis services. I just hate old school drivers and the bullshit they bring to their jobs. But I digress. Rant on. -Tommi

A Historical Argument Against Uber | Time