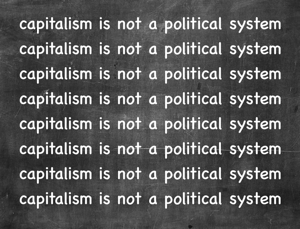 Professor Dr. Richard Wolff. What a guy. What a professor. And he’s all over the you-tubes. Can’t remember the first video I saw of Wolff. Can’t remember if I was bored of it or if it just felt like a lecture at the Uni I never had. One thing is certain. I’ve been struggling to read Das Capital (yes, in German) for some time now.

(And, no, I don’t want to read it in English.) In fact, I think I’m still stuck on the first chapter. Btw, I have this wonderful first edition paperback of all three volumes of Das Capital. Seriously. I’ve been procrastinating for years on this one. Nomatter. There’s one thing I remember about the first few videos I saw of prof. Wolff compared to what I’ve seen recently. I miss all the reviews of economics news that he did. I especially enjoyed his deconstruction of what republicans are doing with their state-capitalism economic policies through out the country. More on state-capitalism in a sec. I don’t recall him mentioning Karl Marx as much as he has in the past few videos, though. This either assists me in learning something about Marx or it prolongs my procrastinations. Should I be worried? (About what?) Either way, after he appeared on the Bill Maher show and announced that he was a Marxist, I started to worry. Well, maybe “worry” is a bit much. That (all) said, get this. Since the early 00s, even the late 90s–where I experienced the weight of Adam Smiths invisible hand as compulsive behaviorism and automaton corporatism was being overwhelmed with the freedoms of stock-price induced tech bubbles, all of which had to be curtailed because the Dotcom boom was beyond the comprehension of old state-capitalists (yeah, in a sec) that couldn’t profit from it–I’ve been saying this: there is no capitalism. Plain and simple. Btw, that’s the essence of my theory regarding what I think really killed off that Dotcom boom. Indeed. It was a systematic culling, dear worst-reader. The Dotcom boom was the first almost purely capitalist endeavor of the baby-boomer generation. Seriously. They’d seen nothing like it before. Remember, they were born of parents who gave us the Great Depression. To save us from that depression FDR didn’t save the system, he saved capitalism. But in that process something happened to capitalism. And I’m off subject again. Here’s what I always say about capitalism. Capitalism is not politics. To not be eaten by capitalism you need some good politics. But to keep things moving, especially motivation, the remedy has to be capitalism. And I mean real capitalism and not the BS of Reaganomics. With that in mind, prof. Wolff stirred some worst-thoughts in me from his economic Update, May 2015. Below the first notes I made During and after the vid.

Karl Marx was a critic of capitalism, he was not a politician. He was a philosopher (by education) and theorist. He saw the lie that was the transition from feudalism to post French Revolution egalitarianism. A fan of the French Revolution, Marx understood what the capitalists had seized upon once the blood letting had ended in France. He also saw the revolution for what it had become not what it was supposed to be be. There would be no Liberty, Egualité, Fraternity. By the end of the 19th century the stage had been set for yet another confrontation, this time not between feudalists and serfs but instead between capitalists and the proletariate. This is where Marxist theory was supposed to be implemented. Instead the stage was set for yet another post revolution ideological confrontation. Marx theorized that the fruit of production could be used for the greater good or socialism. Yet in such a vast agrarian state as Russia who or what would control the transition and the result? Not unlike The French Revolution, the Russian revolution was hijacked. Josef Stalin’s greatest error was that he took capitalism out of the hands of the individuals and put it instead in the hands of an authoritarian communist state. He mistakenly created a means of production in the form of state-capitalism. Socialism as Marx theorized was still nowhere to be found. As we all know, this perversion of Marx’s theories reached its end by the 1980s. As we also know, what killed the Soviet Union was its inability to manage a capital-state.

This post written on a flight across the Atlantic where I’m stuffed into a fuselage like a piece of cattle and I’m not at all appreciative of the race to bottom service that keeps airlines aloft.