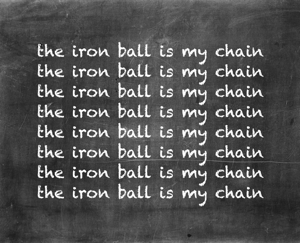 They are finally removing those locks from that Paris bridge. You know, the locks that are supposed to represent girls being princesses swept off their feet by dunce princes with the square chins and riding white horses. Yes. So much is the mindset of a (western) world raised on the whims of money makers and jesters. And speaking of jesters. What a gesture for humanity Parisians are giving us–again. I wonder if most people get it, though. I mean the irony of removing those silly locks and the past we live in. Even though I travel to Paris quite a bit, and I love the bridge with the silly locks–on account I’m entertained by all the goo-goo-eyed girlies that swarm around and over it–am I the only one to see the irony here? I mean, come on. With their history in mind, it makes sense for the French to make this first gesture in the quest for rational thought and rational living. And I love the French for it. But do the French go far enough? You know, I love the French for giving us the French Revolution. Even though, ultimately, in the end, they really kinda screwed it up. But that’s neither here nor there. The point is, how come someone else can’t behead some worthless, slime ball royals and rid us of the burden of monarchy outright–or at least get rid of outdated, patriarchial institutions that literally serve no purpose other than to make half the species live in misery? That’s right, I’m worst-looking at you less than great Britain–on account you guys have never been able to follow French wisdom. I mean seriously. Talk about living in the past. Brits still worship a monarch. Can you believe that! Anywho. I wanted to talk about the French. Oh yeah. If it wasn’t for the French, Etats Unis would never have won that silly war of independence. But I’m off subject again, eh. Anywho. §What is it they say about love? Love is like floating around the ocean while attached to a block of iron and the only reason it hasn’t sunk you is because it hasn’t fallen off the deep end–yet. No? Or did I mix that one up with the ball & chain thing? Ok. How ’bout this one: Love is the difference between done and finished (see quote from silly pop-stars below that are getting hitched). Or wait. Maybe it goes like this: Love is not a two way street–its the 405 in LA during rush hour. Ok. Enough. And. Nomatter. §What I am worst-writing about, motivated by the links below, is that I think there need be NOT a fight for equal rights on the legal and moral issue of marriage. But instead there need be a paradigm shift that in essence will, at best, free half the human species. Indeed. One good thing has come from the mass coming-out in my lifetime of LGBT people around the world. I am thankful to these people for exposing better than anyone in human history the cesspool that is life ruled by authority, subjegation and ignorance all somehow pre-established by mostly white males who hang on to patriarchy like they hang on to their #*?+s. §With that in mind, allow me to offer up some worst-wisdom regarding love and other transactions for those, IMHO, that are seeking equal rights where there are none and have never been. Instead of fighting for equal rights in order to access something that is obviously a failed human precedence, i.e. the institution of marriage, why not fight for something that changes the paradigm? The only legal issue that need be considered in the transaction of love–and yes, in its modern iteration, love, romantic-love and its legal culmination known as marriage, is a transaction–is when it’s about children! That goes for both hetero and homo off-spring. Anything other than children in a discussion about equality is just jibberish, arrogance and hanging on to the past that we need to put behind us. But I digress. Rant on. -Tommi

Paris Love Locks Removed In Order To Save Humanity | The Guardian

Divorced? You May Be Able To Rip Spouse Off Still | HuffPost