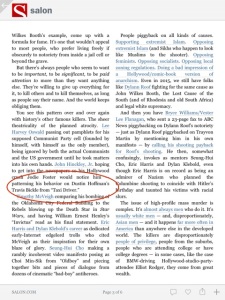 Note on the pic above: this is a screenshot from my iPad4 of the initial post of an article that appeared on salon.com. Clicking on the pic will enlarge it. The author of the article mistakes Dustin Hoffman as the actor in the movie Taxi Driver. An honest mistake–I guess. The post has since been corrected, although the correction is not mentioned. Got that? I wonder what else confuses the author where he feels there’s no need to add a correction notice. But I digress.

It’s ok. Nobody’s perfect. We all make mistakes. The point is to learn from our mistakes. The goal is not perfection but the will to strive for perfection. It’s ok. You’ll do better next time. Or something like that. -t

So it goes. The pat on the shoulder. A gesture of forgiveness. And let’s not forget the unspoken. That is, the unspoken thoughts behind both the forgiver and the maker of errors. For there is, dear worst-reader, a dynamic between forgiver and error-maker–a very profound dynamic. As is the case with the article that lead to this post. What a crock of shit it is, indeed. And not just because the author of the article confuses one iconic actor with another iconic actor from an iconic movie–which deals with one of two parts of the #americant way of life: violence. The author (of the salon.com article that motivated this post) is an obvious knower of #americant misdeeds, haphazard daily life, all ruled by: violence. But the author leaves out the other part of #americant life: money. And so we have: money and violence. Money. Money. Money. Bang. Bang. Bang. These two things are what make and define #americant–even America. But there is, as usual, some confusion–as is the case with the author of the salon.com article (see pic above). Of course, America’s (and #americants) duality one can consider analogous to other things. E.g. Murder vs wealth. Destruction vs (social) status. Arrogance vs. humility. War on drugs vs a country of pharma-junkies. Winner vs loser. Ok. Maybe the winner and loser thing isn’t exactly analogous. For you can have losers that are… Oh so rich and powerful. Can you say The Donald? But let’s not get off subject.

Money and violence. The American way of life. #americant. But how does it all tie-in to what happened the other day where yet another American decided to pursue only one of (his) two options (in being American)? Well, I reckon I just answered my own question. Yet. It is very easy to mis-read what is going on these days, dear worst-reader. For one thing, how many other people have been murdered or killed this week? Does it even matter? I will give credit to the salon.com writer (see article below) for one thing. He did a great job putting together a list of batshit killers in his article. But tying today’s distraught society with yesteryears waring factions (i.e. Booth and Guiteau) is a bit of a stretch. Comparing recent shooter with the likes of Timothy McVeigh is also a bit hard to swallow. Obviously most of the people that commit these acts have their reasons for doing it. But to say that these acts are somehow connected? Well, I’m not sure I can follow that logic.

Indeed, dear worst-reader. It’s easy to mis-read things today. Perhaps that’s because if one does really read it–look at it and look deeper–the mirror starts to appear. Or we see how the authors of our lives get things so terribly wrong. Add to that the fact that there’s all this confusing stuff about first person shooters (for me Wolfenstein–oh mein leben!–comes to mind), manifestos and motivation. Like. What is this guys true motivation? This shooting should probably be known as: yet another office shooting by a begrudged, marginalised, under-achiever whose life, like so many, is determined by the elbows of others. In one article I read, frightened colleagues at the TV station where the victims worked were afraid that the killer was coming to get them. Now why would they be afraid for the lives? Could it have something to do with their elbows?

The only reason this shooting is getting any attention is because a picture perfect blonde is killed in cold blood and everyone can watch it on their smartassphone. And btw! Where is the manifesto the killer wrote AND FAXED–who faxes these days–to the media? Do the powers-that-be really believe that Americans can’t handle what this American killer wrote? Again. Looking too deep into these things means: mirrors. So sit back and don’t ask too many questions. The truth is in the safe hands of media editors everywhere. Oh yeah. Violence and  money, baby. Oh yeah. Violence and money and… avoid those mirrors.