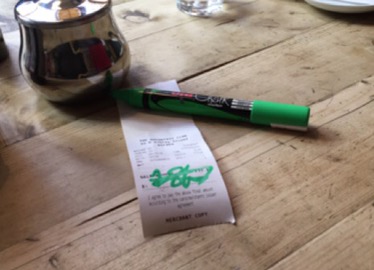 Some dialogue while paying for breakfast this morn.

(Tommi takes the pen the waiter gives him but notices it’s defect.)

Tommi: Sorry mate, you got another pen?

(Waiter grunts with a cockney accent and goes to get another pen; he returns with 2nd pen.)

(Tommi takes the 2nd pen but it is also defect.)

Waiter: What? Are you pulling some magic on me?

(Waiter takes 2nd pen and fiddles with it.)

Tommi: One more chance. And remember: Three strikes and you’re out, mate.

(Waiter grunts again and rushes off. A few seconds later he returns and places a green magic marker in front of Tommi.)

Tommi: I’m not signing that with a magic marker.

Waiter: Oh yes you are!

Tommi: No. I’m not. My third grade teacher made me do weird shit with a green magic marker.

Tommi: Oh come on, mate. Don’t remind me of those days. It was horrible going to public school in America. Magic markers were everywhere.

Waiter: Did they make Donald Trump use a magic marker, too?