Part 1 of this pseudo-review is here. Part three is here.

Update: day after worst-writing this I was on my über e-bike and got hit by a van. But it was my fault, I guess.

Disclaimer: Probably as I worst-write this worst-post I’m just now surpassing the 1000km mark on my new e-bike. With that in mind, are you asking how it is that I can ride an e-bike and chew gum at the same time, i.e. worst-write a/this blog post about it? Wow. What a great question. To that I can only answer…

Did I mention that we bought two Chargers? We did so, btw, as a result of selling our second car last year. These two bikes, for the most part, replace that car. My wife has the Charger Mixte Nuvinci. Since she (still) works for the man, she’s the one that continues the sinners life and uses a car most of the time to get to work. Of course, she’s not an all-weather biker. When it’s not raining or too cold and her busy management schedule allows it, in the morning she’ll ride her Mixte to our local (regional) train station, about 5km away, and from there she’ll board the train with the bike and ride (about 25km) to a train stop near her office. From there she’ll ride the remaining 10km to work. After work she rides the whole way home–about 45km.

The Charger GX comes with an Abus folding lock and it’s own carrying case that is attached to the bike’s rear rack. The key to the lock is the same key that secures the battery–which, I guess, is a good thing. I have no need to remove the battery, though. I suppose, if I lived where the bike would be in a cellar or basement that has no electric socket, let’s say, in an apartment house, then I would have to take the battery with me to charge it, thereby requiring me to unlock it from the frame. As of yet, I have no use for the dual role of the Abus key.

It’s taken a bit to get used to the folding lock but I think I’m getting the hang of it. I’m still worried how it bangs on the thin spokes of the wheels as I usually insert it through the rear wheel and the frame. Although the lock is too short for securing the bike to a pole or fence using it, I’ve added a steel cable that I also feed through the front wheel. At the least I’ve got both quick lock wheels secured. I would never use this method to lock the bike somewhere in the city overnight but I do feel secure about it while I’m in the city during the day. Btw, I store the cable along with various tools that I always ride with in one of the rear bags.

That rack (in the front).

I was skeptical about the front rack after I picked up the bike. I even contemplated removing it after the first few rides. But I’ve since come to my senses. Rated, according to the owner’s manual, at only 3kg, I’m sure I’ve carried at least 6 to 10KG on it so far. I’ve already used the front rack to deliver cake (while visiting friends which was stored in a heavy plastic container and wrapped in one of them big, blue Ikea shopping bags and then attached with bungee cords). I’ve also used it to carry home a month supply of toilet paper and kitchen paper towels. The front rack can easily hold six bottles of Rioja Reserve that I picked up a local wine dealer. The other day I also used the front rack to deliver a Rhine River alligator to a friend who payed me righteously to catch it for him. Please don’t ask me for pictures of the alligator because, if you don’t already know, it’s not quite kosher to ride a bike with a live alligator attached to it via bungee cords–let alone catching the damn thing. ;-)

I use ten year old Ortlieb side bags with the rear rack. So far these bags are scratching the hell out of the paint. The rear rack is rated at 25KG and that’s probably more than I’ll ever need. I usually only fully load the bags when I go grocery shopping. When I’m running around to get fresh groceries, which I do three to four times a week, I certainly don’t need to carry that much weight. But like I said previously, one bag always has my tools, tire repair kit, etc. I do plan on eventually getting that fancy Ortlieb office bag. That way I’ll feel safer carrying my laptop to work or to meetings. The rubber bungee cord that comes with the rear rack I’ve not gotten much use out of but I’m sure I will eventually. One other good thing about the rear rack is that I use it to manoeuvre the bike in my basement. It’s the best handle to pick up and move the bike.

Btw, It’s not a seat. It’s a saddle. I was skeptical about this Brooks “saddle”. On my sporty cross road racer I have one of them fancy, comparatively cushy bike seats with the ergonomic (and prostate saving) split down the middle. (For two hours of leg work that split really does work!) The first few days on this old British designed horse saddle did leave a bit of blood in my undies. Once that cleared up, this is the best f’n bike seat (saddle!) I’ve ever experienced. Obviously there is no cushion and even the thudbuster doesn’t help when it comes to those knots in the road you can’t get around while riding. But there’s something about how my/a a$$ just fits in/on this thing–and it’s only just now starting to break in. I’ve been using mink oil on the underside of it to treat it hence the discolouration in the middle. (Remember, less is more!) I’ve also changed the rubber on the thudbuster from middle to soft and plan on trying hard soon. So far soft is too soft and middle was too hard. Does that mean hard will be…? Nomatter. Even after four or five hours on this saddle, I’d still take it over any other seat I’ve ever had. Where other seats hurt you in the inbetween, this one does NOT. It just hurts your whole a$$. I know that might sound weird but to me it’s kind of a relief. Will I put a saddle like this on my cross racer? Probably not. But I did read that Brooks has a sportier and lighter offering for race bikes. So far this B17 is worth the hype!

The right brake leaver (rear brake) and the gear shift mechanism do not fit on the handlebars. I’ve moved them here and there over the past few weeks and can’t find the right position for either. They are both in each others way. I can’t adjust the brake leaver height to where I want it because moving it means it will collide with the shift mechanism. That also means I can’t get the shift knobs in the right place in order to utilise a triple downshift with one push. Bummer!

The gears and the derailleur are top notch on this bike. There are moments where the sound from shifting is pretty scary, though. The derailleur has a switch on it that stiffens it. This is supposed to stop the chain from moving too much while on rough terrain. When the switch is “on” and you shift it sounds like a hammer hitting an anvil. I’ve not found much use for the switch so far. Who knows, maybe future mountain biking will change that. The only downside to a chain and derailleur (compared to the fancy Rohloff or my wife’s fancy-pants Nuvinci) is the mess of keeping it clean. My maintenance routine is to simply wipe it clean after every other ride with lots of WD-40. (Aghast!) I only use oil on my bikes chains when they are not in use for more than a few days–i.e. when I have to leave town. For those who don’t know, extended use of WD-40 alone will lead to rust on a bike chain. As far as lubrication goes, WD-40 is more than sufficient and as good as oil–on a per ride basis. If you ride off-road or in dry, dusty conditions, whether oiled or full of WD-40, you have to clean the chain regularly anyway.

Even though I prefer a battery that is better integrated in the frame (Stromer!), I’ve become accustomed to R&M’s minimal but functional design choice(s). With the battery kind of hanging there, I wondered if it would remain tightly mounted. I’ve heard stories of people not properly snapping-in their battery. A few of these bikes have been returned because customers didn’t snap the battery in properly and it was damaged rolling down a road. But that’s not the least of my worries. It rains a lot in Germany, don’t you know. See that little crevice under the battery and next to the frame? Guess what else is right there? That’s where the charger cable connects to the bike. Water collects in that little crevice. Yeah. Water plus a 500w battery and a charging port… No issues there. Or? Nomatter. After every rain-ride I’ve gotten used to checking for water before plugging in the charger cable.

It’s too be expected that after a 1000km the rear tire shows more wear than the front. And to be honest, I’m not sure the rear is gonna make it to 2000km. The question is, with the amount of off-road riding I do, can I replace these tires with those fancy Schwalbe Big Bens or do I stick with knobby tires? I’m thinking I’ll go with one more rear knobby and after that move to the more street oriented Big Bens. We’ll see. 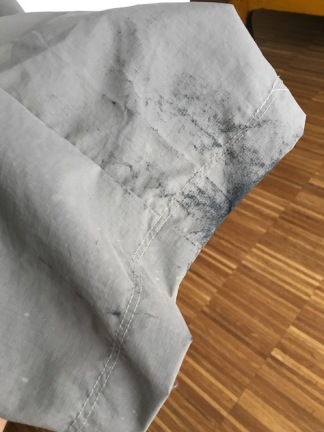 Two things about a chain, oil and keeping things running like a well tuned killing machine. The chain is scary close to both the frame–where the Bosch motor is attached–and the tire. Even though their is a rinky-dink guard around the front sprocket, as you can see from my pants leg, it doesn’t do much good. This is the price I’m willing to pay, though, I guess. Did I mention that I love this chain and derailleur setup? It’s so much more valuable to me than having spent almost a thousand Euro more for an over-engineered, over-kill Rohloff.

Ok. Ok. I get it. The dealer has to make some money, too. Right? But what do we do when the dealer is… useless? I hit the first service interval within a week of owning this bike. When I asked the dealer when they would service it they just laughed. “It’s spring time and everyone’s buying bikes,” they said. “We’re too busy for your silly service,” they added (or the like). And so. I don’t get a service appointment until the end of June. Did I mention that I’m already at 1000km? Come on. Give me a break. Bike ownership shouldn’t be like Apple Computer ownership. As in… come on dealer, can’t I just give you my money?