About ten years ago I got a nasty tick bite between my big toe and my pointer toe on my left foot. I was doing some garden work visiting family in my beloved #americant and I wore sandals when I should have worn boots. Although I managed to get the tick off without much hassle, the swelling and puss coming out of the wound that was left behind became unbearable by the next morning. I jumped in my rental car and drove to a wal-mart-like clinic in town that my sister recommended. When asked by the receptionist if I had insurance I told her I did but that I lived in Germany. Looking at my insurance card she said, “Oh, I don’t even know where to begin with a language like that.” I then told her that depending on the cost, I’d rather pay directly. “Oh, ok then,” she said. “I need a credit card.” I gave her my German credit card and took my place among the many in the waiting room and filled out the patient questionnaire. Eventually a young Indian doctor helped me by opening the tick bite, cleaning it out and giving me some antibiotics. “Within a day or two you will be right as rain,” he said. Upon leaving the clinic, the receptionist charged my credit card eighty dollars.

I got hit in the knee by a van in the early afternoon last Thursday while riding my bike. The pain and swelling made me go to a nearby emergency room that same evening. Hoping only to get an x-ray to see if I had broken anything, I entered an ordeal that ended up consuming days, hours in waiting rooms and numerous doctors that confused me more than when confronted by Pam Anderson speaking Chinese. As of the worst-writing of this worst-post, I’ve had x-rays, CT scans and even my first MRI. I’ve been given crutches, a leg brace and even some sodium-something-or-other that I’m self injecting to prevent thrombosis because I’m not supposed to move my left leg. 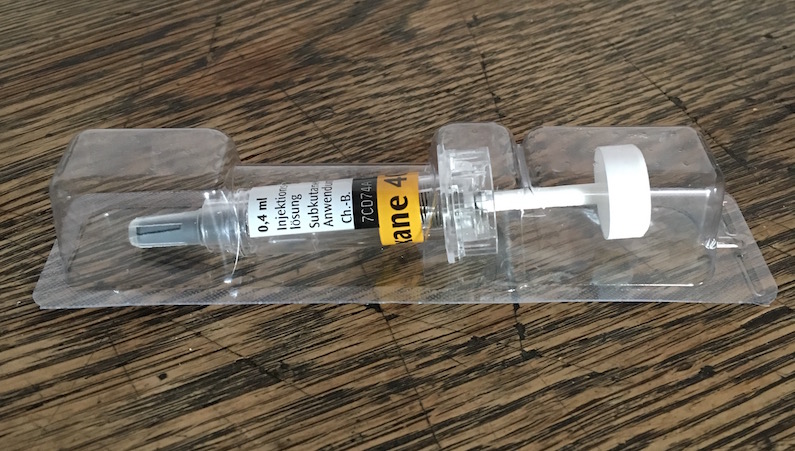 As you may or may not know, dear worst-reader, Germany has a fairly decent national healthcare system. If you were to ask me if I utilise that system I would answer: fcuk no! Reason for the expletive is another post. Reason that I’ve always been a skeptic regarding national health insurance systems will be dealt with in the rest of this worst-post.

Indeed. After all the care I’ve been given regarding my knee in the past few days only two things stand out about the whole ordeal.

But before I get too deep into bitching & moaning about Germans and how the only thing they have to offer the world is über-priced luxury mass produced cars driven and designed by idiots, let me just say this: the German national healthcare system sucks! It sucks batballs. It blows horny goat-mules that have herpes on their penises. If German healthcare were a duck I’d shoot it with my twelve gauge and cook it up in a witches pot only to throw it away and bury it to prevent others from eating it. Then I’d gorge on self-pity-candy till I throw up unicorn puke. Oh. And I hate things.

I warned my better half after the initial emergency room visit after that fcuking van hit me that I would have to be careful regarding my care. “I’m not worried about the costs, honey, of course. But I am worried about what THEY could do to me,” I said. My better-half laughed and smirked as only a well-off German, spoiled by the spoils of The Marshall Plan, can. By the end of my initial emergency room endeavour things were clear: there was a limit to how much care I would get and, more importantly, on whose terms that care would take place. And so, they took some x-rays of my knee. From the x-rays they thought I had a tibial plateau fracture but said, because of lack of personnel, I would have to come back in the morning to get a CT scan, which would show more bone detail. I returned bright and shinny the next morning and, without much wait, got my CT scan. Conclusion? No fracture. Then the doctor in the hospital recommended a MRI scan to see if there was soft tissue damage. When the doctor tried to arrange the MRI she came back saying that I would first have to go to a regular doctor. Obviously the hospital had booked what it could off my insurance up to that point and obviously reached a limit. In order to get the further care–that they were recommending–I would have to go to another (different) doctor. Yeah, that makes sense. Or? They either work like a team or they work in collusion. I found a local orthopaedic doctor online. Let the circus begin!

The orthopaedic specialist, without even examining me, gave me a prescription for an MRI of my knee. Should I be thanking the heavens now, I thought. Because of demand, though, I would have to wait till June 20 to get the MRI done. Oh really! Luckily my neighbour was a radiologist and could squeeze me in at her hospital the next day. I only had to wait till Monday to return to the orthopaedic specialist with the new pictures. Bright and early on Monday I waited a full hour and a half in his waiting room. When I finally got to see the doctor–again without ever even touching my knee–he was reading from the MRI report–he never even looked at the pics–he recommended an operation to fix some minor cartilage damage.

“But doctor, don’t you even want to look at my knee?”

He arrogantly pointed to the document from MRI doctor. At the same time he was massaging the back of his throat with the temple tips of his rimless glasses. He sat down in the exam room while I remained standing.

“But doctor, when I was younger I didn’t treat my knees well as I wasted a great deal of intellectual time playing highschool sports in suburban hell #americant and chasing girls. Till my mid-thirties I regularly jogged five to eight miles three or four times a week and also ran away from girls. I had to give up jogging because of a bone cyst that had developed on my left achilles which I got from an injury when I was young–running away from girls. By my early forties I had learned that my left leg was two centimetres shorter (or longer?) than my right leg–and this was caused by marriage and no longer running away from girls. Since my late forties I’ve been limping regularly, especially after heavy rains and three divorces…”

“Wait. Please, please,” the doctor said. “I would recommend two doctors for the operation on your knee. One of the doctors might be a problem to schedule because of your insurance. You don’t have good insurance. The other doctor will do it but it may take a year before he can.”

Let’s be clear here. I have the right as a blogger and useless eater to bitch & moan about everything. Yet why do I favour paying eighty dollars at a wal-mart-like clinic than having a system pay thousands upon thousands of Euros for care that ultimately has nothing to do with caring? Obviously it’s not right to compare a tick bite to a meniscus injury. So I guess what I’m really getting at is the fact that I have great health insurance yet when I consider what it is that doctors do with that insurance I get pissed off as though nothing is… right as rain.

Without even touching my knee or asking a question about how I felt or even how I got to his clinic that morning the only thing the doctor with the fancy Porsche could come up with was that I needed an operation.

Butchers. They are all fcuking butchers.

Would you believe that at his clinic there are no parking spaces for patients but he has a lone spot near the front entrance of his clinic. Now don’t get me wrong. I don’t care what kind of car a doctor can afford to pay interests rates on. I’m seriously not a class fighter here. I’m just pissed off at the fact that a national healthcare system is ultimately nothing but a conduit for money transference galore.

Oh. As far as my knee is concerned. I can walk but I’m not ready to run. I can pedal a bike no problemo. There is still some swelling so I hope I don’t have an issue with water-on-the-knee. There is no acute pain only some stiffness. I’m wearing one of those fancy (and expensive) compression bandage/stockings that really does the trick.

Links that may or may not coincide with the post: