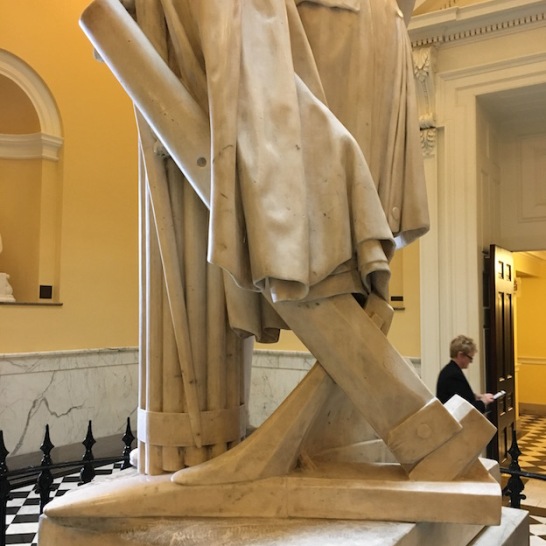 Homeland bound. Homeland waning. Homeland unwanted visit–but also not a voluntary one. Although this was/is my normal off-season time of travel to the Homeland, I thought it better that I let it go this year and jaunt over the Atlantic early next year instead. Reason for change of travel-mind? Yea, could have something to do with family. Family? And so. Now I’m wondering if the word family has taken on the same superficiality as “hero”. Oh. The thoughts churned while traveling home. Nomatter. There are indeed more impending things to worstwrite about.

Took a tour of the Virginia state capital yesterday and made a massive (personal) discovery. While an elderly southern bell provided us with all the obligatory knowledge-bits about where we were and what we were looking at, I found myself facing, according to our tour guide, “the most priceless statue in the United States”. As the southern bell detailed George Washington’s experience of having a plaster caste of his face being made by the French sculpture Jean Antoinne Houdon, my third eye got caught on… the thing Washington was leaning on. At first I let my thoughts pass and even joined the group of geriatric tourists in another chamber so as not to miss any knowledge bits. But the statue of GW was in the rotunda and with each chamber that was presented to us, I had to pass this curiosity. I think there were four chambers all-together but after the second one I skipped the group and remained in the rotunda. I couldn’t take my eyes off the object that GW was leaning on. When an employee of the building passed by me I stopped him and asked what the object was. The man searched his mind but couldn’t come up with the name of what it’s called. Then he explained–in a normal, non-southern voice:

And the object behind that, I asked him.

It was a moment I will take a long time to forget, dear worst-reader. In fact. Put another way: Holy shit. George Fcuking Washington is a Fascist! How do I know? Well. He is resting his left arm on a Fasces, i.e. the international symbol of Fascism. Or. Put another way. Even though this statue was sculpted in the late 18th century, long before what I consider to be the antithesis of fascism (and the reason for fascism), i.e. communism, GW is leaning on an object that symbolizes terror of another kind. Go figure, eh. Now. With that in worst-mind, allow me to traverse this brain flatulent: Irrespective of #Trump and his dipshit claim after Charlottesville that has lead to Antifa getting back in the newz, let’s see if this statue can be removed, too. Yea. On the other hand, as far as worst-writer is concerned, get rid of all symbols of hate, greed and war mongering, etc.

PS. But worst-writer, what is a fascist? Good question, worst-reader. Here or here.