As stated here and here, I’m a big fan of Riese & Mueller e-bikes. In fact, after my better-half bought me the Charger GX last spring, the only time I’m not on this bike is 1) I’m pooped from riding it and 2) the weather sucks. Since the power of this e-bike eliminates the need to consider weather, especially wind as a riding factor (wind can be pretty severe on this part of the Rhine) only heavy precipitation keeps me from riding it. I use this e-bike for everything including grocery shopping and errands (utilising trusty and ageing Ortlieb saddle bags and the rear rack). After becoming a single-car family, I’m somewhat surprised how little I’ve missed having a second car. I suppose if we lived more remotely instead of on the outskirts of a city there’d be more reason to have a second car. But knowing what I now know about e-bikes, I’d actually continue without a second car until circumstances dictated otherwise. Of course, every time I drive our remaining car I’m also reminded of how $hitty it is to drive in Germany anyway. I mean. Come on. Just get a load of the traffic between D’dorf and Köln—most of which is hindered by severe construction (as though the Germans are just now learning how to build Autobahns). I’ve been riding my R&M between the two cities and other than an extended, boring passage which feels somewhat middle-of-nowhere-ish, I don’t mind the extra time it takes to ride the forty or so kilometres. But then again, I’ve not actually done a direct comparison of riding or driving from D’dorf to Köln. Maybe I should do that someday. Especially considering parking. But I digress.

The “Service” notice keeps appearing on my Bosch Intuvia screen. I think I’ve had two of the service inspections done so far. To be honest, I’m not quite sure what the dealer does with the bike during an inspection. The process is not at all that transparent and the bike doesn’t feel like anything has been tightened, changed or oiled when I get it back. Hell, they don’t even clean the thing. Of course, there’s some kind of checklist they have to go through—which they arbitrarily hand to me after I pay. In the end, as usual, it’s all just a waste of money–and time. Then again, I can’t update the Bosch firmware, which has been updated twice since acquiring the bike, hence the two inspections I’ve subjected myself to. Which brings me to the following question: Why do dealers have to charge for a firmware update if Bosch doesn’t charge for it? Oh wait. Who would pass up a chance to rip-off customers of 25,-euros if they can? (Sarcasm off.)

Luckily, my dealer and the people he hires are a bit ditsy. That leaves me plenty of space to criticise, criticise, criticise. As mentioned in a previous post, R&M has provided a new frame for my e-bike due to damaged paint when it was delivered. I’ve had to put off frame replacement though because my dealer is unable to cope with not only e-bike demand but e-bike service. Now get this. The replacement frame was delivered in June. The dealer requested that I wait till the fall to replace the frame because he was too overwhelmed with “seasonal” business. When fall came around, due to my schedule, I requested that we do replacement in October. We finally set a replacement appointment for Nov. 2. When I arrived Nov. 2 (the morning after jet-lagging from international travel the day before) the dealer told me his mechanic was sick and I’d have to leave bike with him for two weeks. That was/is unacceptable. We’ve now changed the date to Dec 5 and I have insisted that an appointment is appointment—he shouldn’t tell me that he needs two weeks to replace the frame when I bring it in next time. We’ll see how that goes. (And by-the-buy, let it not be told that I could easily give up my GX for two weeks because, well, I could always use my wife’s Charger Mixte. The only problem is, I don’t want to give up my GX—at all!) 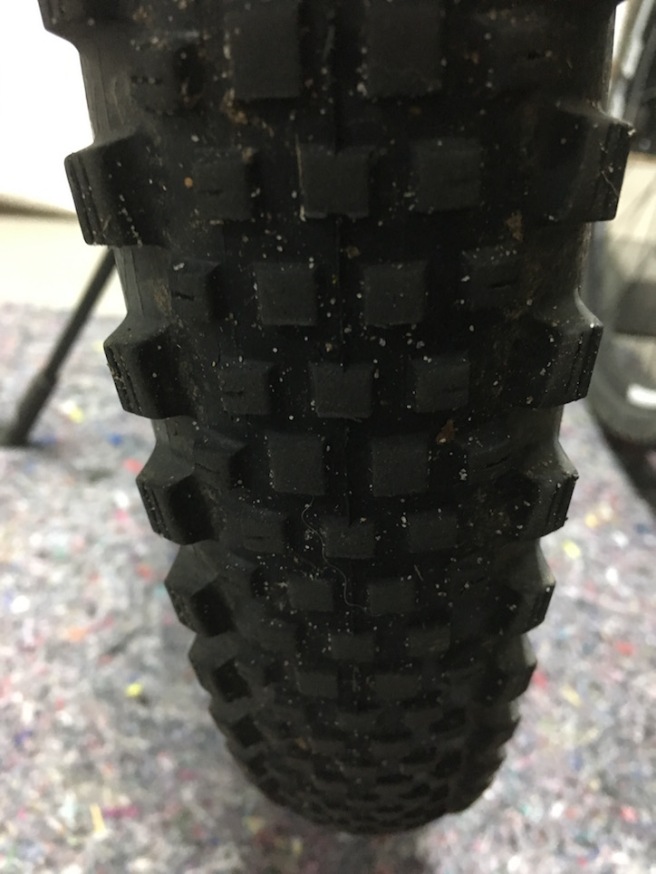 There is something fantastical about the knobby tires on the GX. As far as biking goes, regular or e-biking, the Rock Razor tires are huge, bulky, and kinda ugly. I have to deal with countless comments from fellow bikers about how my tires are… not really bicycle tires. Seriously. I mean… I have pedals. Wheels. A Frame. Handle bars. And there are still some people that think I’m riding a monster-truck on two wheels. With that in mind, the huge tires on this bike are so well designed and made that, other than the noise they give off on flat roads, they are like the best friggin tires I’ve ever experienced on a bike. You would think, due to their size, width, knobs, etc., that high speed turns on roads would, at the least, be edgy. This is not the case. They don’t get unstable, wobbly or feel the least uncomfortable. Of course, off-road, they are even better. There is no terrain that I won’t ride across on these tires. Whether riding through sand, mud or rocks, nothing shakes them.

Then again, they don’t last forever. As you can see in the pic above, my rear tire no longer has any bite. I’ve ordered a new tire to replace it which will be added when I get new the frame next month—and probably just in time for winter. I am indeed curious how these tires will handle the wet, cold and sometimes icy winter weather around here.

Juice be told, baby. I really wish I had access to the Bosch system in order to see how my battery is performing. I should be into the hundreds of recharges on the battery by now. I think it’s recharge limit is around 700. I guess it’s held up well so far. But… In 3000km I’ve noticed how the battery has definitely weakened. I’m getting at least 20-30km less battery than the first 1000-1500km. I really started noticing the weakening after 2000km. Of course, if I had access to the Bosch system, I could see if, perhaps, I’ve let the e-bike spoil my legs a bit—which could be the  cause of higher battery usage.

As far as battery modes go, here’s how I use my battery:

That’s it for now.