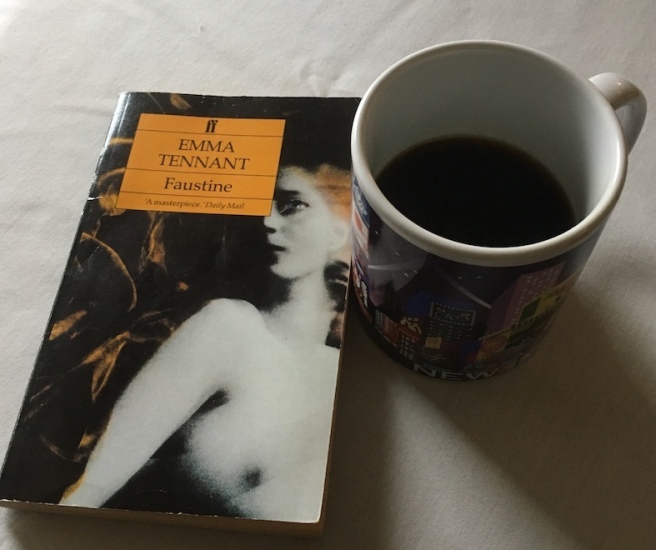 The only problem worst-writer has with this wonderfully imaginative novel about The Feminine is how, if it were a quilt, it would be sewn together with a single thread. That thread, unfortunately, is the opposite of The Feminine. I suppose, if pushed to answer what that opposite (thread) is, I’d have to say this book is not exactly about women. Ironically–or not, very few men play a role in this book, except, of course, the antagonist–who only appears at the very end. In other words, this might just be a book about questioning womanhood post ca. the 1950s. But don’t quote me on that. Wait. Hold a sec.

Women and The Feminine are two different things. Right?

According to her Wiki post, Emma Tennant uses magic and mystery in her work. I was disappointed how neither really played a roll in this book. Even though Tennant brilliantly integrates the Faustian bargain into the story, instead it is really written with a quilt in mind. And that is rather confusing to me. Feminising Faust just doesn’t seem like a worthwhile endeavour–even though Tennant writes with excellent craftsmanship. I’m saddened to say that this story tries to deliver something but in the end all there is–is all that’s ever been: predestined, self-perpetuating social norms and gender roles that so many have embraced since Biblical apples galore. Nor is this book very entertaining. And that’s why I love it and plan to hold it dear for the foreseeable future.

Indeed. The feminisation of Faust. Is that enough for a book of this sort? A chick selling her soul to the devil, in and of itself, could be a huge mystery–or even a great piece of magic. Yet there is only reference to a beauty farm that manages to change a grandmother into a rival for her daughter’s lover. Then there’s a TV repair shop with back room. Like so many other places where women choose to go in their world of wanton patriarchy, we get nothing from Tennant about it–or darkened backrooms. It is here that the author tears clear from magic and mystery and instead goes off on a soap-opera-like tangent–which is probably best palatable to the author’s taste. But then again, if asked whether or not she’s a feminist, this book would make me answer: she is not.

On the other hand, if, like me, you’re the least bit curious what goes on in the mind of a woman (and you’re a man) that has nothing to do with the act of procreation or porn-like good-fucking, this book might be for you. Also. I can’t help but feel that faith (or is it destiny) had this book waiting for me at exactly this moment in (my) life. The reason for that has something to do with the #MeToo movement, Harvey W., and desexualising everything to the point of it being so uninteresting that it’s interesting (again). But I digress.

The writing in this book is brilliant. That can’t be said enough. It is truly a work of art chiseled out of a raw piece of… dare I say… feminine granite. It also reminds me of a combination of Oscar Wild’s Dorian Gray and the film The Devil Wears Prada (or M. Streep in that movie). Even though it takes Tennant almost two-thirds of the book to get to the point she’s trying to make (about feminism), the thing that kept me reading it wasn’t what she was writing about but how she writes it. There is much to learn from Emma Tennant.