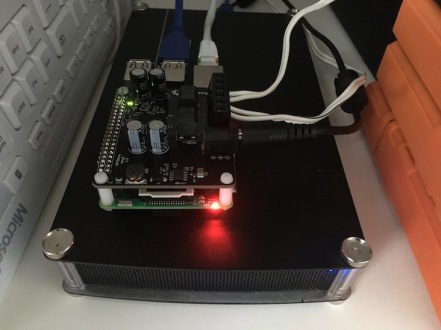 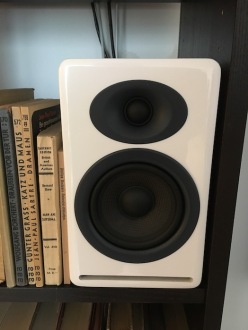 First. The newest Raspberry Pi was kinda hard to get till I happened across it. I’m worst-guessing this is due to limited supply, heavy demand. Some online shops were taking orders of the Pi but then not indicating delivery dates. Second. I bow humbly to #Hifiberry and their new Amp2 and the fact that I just happened to see they had new Pi’s available when I was gawking at maybe getting another of their audio boards–on account I’ve been so tickled with their DAC+ Pro board. Btw, I wasn’t interested in the RPI3B+ to even go with the new Amp2. I was ordering the Amp2 to put on my RPi3–which would give me two potential audio sources in my house. The RPi3B+ was a just because purchase. Here’s a rundown of my current Pi setup:

Now on to a pseudo-review of Hifiberry’s Amp2.

Wow! I was blown away with the first sound that came out of the Amp2. Using Volumio, I’ve been testing this little audio miracle on three different speakers (see pic above). The great news is, it doesn’t matter what speaker I was using. The Amp2 drives them all till a smile rolls off my geezer and curls back ’round into my ears. Of the three speakers I own, my favourites are the Pioneer BS-22–which I lugged across the Atlantic (on account I couldn’t buy them in Germany) in early March. And although my B&W 305s are currently being stored in my basement, I hooked them up just see if the Amp2 could power my ageing low-end towers. It powered them with gusto! Of course, the smallest speakers I own are the Audioengine P4s–which were, I thought at the time, the best deal I had ever made on speakers–but then I got the BS-22s. Nomatter. I’m a cheap-o pseudo-audiophile and I don’t mind admitting to it–especially considering the cost of some of those fancy speakers from Apple, Sonos, etc., which also limit your listening experience through stupid transcoding. So let’s move on.

My only gripe with the Amp2 right now is software, specifically Volumio. I run a Mac home network and Volumio cannot access Mac shares. Nor can it access Mac SMB shares. I’ve been reading forums, posting questions to support sites, reading more krapp, and to save my life I cannot get Volumio to access my 2010 headless MacPro which is a iTunes server, a Plex Media Server and, of course, a file server for a small household of multiple Macs and iOS devices. I’ve given up on networking with Volumio since I have a few old spinning 3.5″ HDDs lying around. So I bought a UBS external powered case and let the RPi/Amp2 access music files that way. Works great.

The Amp2 is nothing short of a little miracle audio board. It’s rated at 60w of power and I can say that it easily produces sound as good as my TEAC A-H01 amp. In fact, it’s better than my TEAC in that, when used with Volumio, I no longer have to get up to change the volume. Another gripe I have with the Amp2 is that when controlling it with Rasplex or Volumio, neither has an output/driver setting specifically for it. According to the Hifiberry website, you’re supposed to choose the Hifberry DAC+ driver because “the Amp2 is basically a DAC+ with an integrated power stage.” After fiddling with the DAC+Pro (on my RPi2) for a while, I realised that the biggest issue with this type of audio device is definitely the power source. I’ve since purchased two 5v 3amp micro USB power source/cables for my other Pis. Fortunately Hifiberry sells a small power brick separately so I went ahead and bought that for this setup. So far, the brick is the best way to power the RPi and Hifiberry. In fact, considering the flimsy-ness of the micro-USB in the RPi, I’m really digging the Amp2’s way of powering things.

After a few weeks of testing, the Amp2 works so well that I’ve actually replaced my living-room Rasplex client with it. My living-room TV now only serves as a monitor for my ageing AppleTV3, which we rarely use. In fact, the only time we use our TV is as a screen/monitor for Apple Photos slideshows via the AppleTV3. We’re no longer TV gawkers so we don’t miss NOT having a TV as part of music play. And to be honest, I’m really digging controlling all our audio needs with my iPhone. Besides, when my better-half watches her German TV stuff she does on her iPad. And so… why the hell am I worst-writing about how we watch/use a TV? Nomatter. I listen to music when cooking, when worst-blogging, and especially when I’m cuddling with Beckett the killer pug on the couch. If you can get through the minor hassle of the Amp2 not having a decent case (yet) or having to fix speaker wires to it, this is one heck of a purest audio device that can be easily hid in a shrank, book shelf, or even under a couch, etc. All you need to control it is a home network, a smartphone and a bunch audio files.