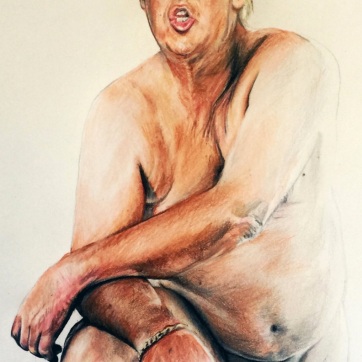 There is a reason in my beloved & missed #Americant there are so many shows on brain-dead TV that make fun of conservatives. You know, The Daily Show, Samantha Bee, pretty much everything on Comedy Central and, of course, Stephen Colbert. The most obvious thing to keep in mind, though, is that conservatives, especially compared to liberals, are just easy to make fun of. Does that mean that Hillary isn’t easy to laugh at? Maybe. Conservatives–and I mean all conservatives–simply have a price to pay for their greed-mongering, for their bigotry, the hypocrisy. They deserve in the least to be made fun of–especially since they’ve won at everything else for the past thirty yrs. Seriously. The best joke a conservative mind can come up with is: three Hillarys walk into a bar where there’s an email server, Benghazi and a blue dress stained with the same sticky stuff that keeps #Trumps hair….

Beyond the funny stuff, the political $hit liberals do–at least in the past thirty or so years–hasn’t been about propping up rich people (although I’ll agree that certain aspects of that is arguable, especially considering Blue-Dogs and neo-liberals), wars-of-choice or religious nuttery that goes beyond the extreme bat$hit humanity tried to purge itself of with things like, gee, I don’t know… The fcuking enlightenment. Anywho.

I’ve been worst-thinking lately about what makes a conservative and how you can tell someone is, in their heart of hearts, conservative. The problem I’m having reaching any conclusion though is that I’m not smart enough to figure it all out. You know, empirical study; analysing/figuring $hit out like a professor would, etc. I’m sure a philosopher somewhere has touched upon the issue. I’m obviously far from discovering that piece of work, though. So I’m just gonna go with my prejudices here in reaching my own worst-conclusion. That’s right, I’m prejudice against conservatives and conservatism. One of the main reasons for that is how it’s all become so obvious that conservatism (of late) has embraced certain aspects of political extremism that, at best, borders on fascism. Beyond all the other uglies they espouse, a really bad part of being a fascist or a conservative is that these people simply are not funny. Nor do they know how to take a joke.

So let me cut to the chase. The pics above are examples of how you can tell if someone is a conservative–even if they say they aren’t. Just look at the pictures. If they/you laugh or giggle at the pics they/you are a conservative (in your heart of hearts). This little experiment also includes, buy-the-by, libertarians and Blue-Dog Democrats, i.e. neo-liberals. FYI. Libertarians, IMHO, are nothing more than republicans without any balls. Blue-Dogs and neo-liberals are cocksucking corporatists that haven’t yet seen the light about what it is they do–i.e. pawn of the piper–in order to make a living (on the backs of others). And so.

You are a conservative if you find the pics above in any way humorous. The reason for that is easy: the pictures depict something that is not only true but not twisted enough to be comical. For example, #Trump treats #Americants like children doing yard work (and #Americants obviously like it that way). The reality of the pic, though, which the motif subverts, is too deep for a conservative mind to actually grasp. And so… A conservative will giggle at #Trump bullying a little boy and his lawnmower. Whereas someone with a mind, with intellect, will see the picture for what it is: the truth.

Women, so many of whom enabled #Trump irregardless of his locker-room banter, drink the tears of liberals while sunbathing in their own grab them by the pu$$y swimwear. Which is fine as long as some other woman’s pu$$y is being grabbed. And while I’m on the subject, why isn’t there a pu$$yhat protest everyday in #Americant? Why aren’t stars from hollywood, especially the hot ones, boycotting the moneyed interests of movie makers who are benefitting from the mindless tax cuts for the rich that President Stupid dished out and that only adds to what has to be paid for by others in the future?

Only an a$$hole can in anyway believe that #Trump was some kind of protest against the establishment. If #Trump has proved anything about who and what he really is, he is a great–if not the greatest–conman the united mistakes of #Americant has ever seen. There is a whole country of a$$holes that have fallen for his con.

And then there’s the grand painting of #Trump and (his) stubby. Although the portrait is humorous in its clarity and uniqueness, it is so real that one can only scream in absolute horror–unless you’re a conservative–which means you’ll either shun it or giggle at it. And so. Here is President Stupid of the greatest land ever of Free To Be Stupid in all his/its glory.

PS Another way to know if you’re conservative is if words like millennial, LGBTQ, borders, immigrants, PC or political correctness, liberal this or liberal that, etc., etc., appear in the news you’re consuming. And although I think those words are important, be careful who is writing/saying them. It’s usually someone full of lots of uglies on account them words ain’t the issue(s).