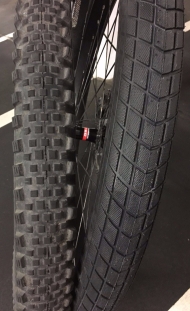 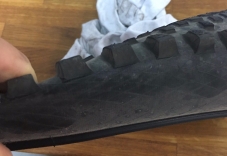 Should have made this change a while ago, dear worst-rider. Now that I’ve finally done it, though, would you believe, there’s one more potential change lurking in the wings. More on that in a sec.

I found a special deal online for a pair of Schwalbe Super Moto-X 27.5 650B tires last weekend. 20,-€ a pop, baby. Plus, on a weekend order, it included free shipping. For you see, dear worst-rider, I was gonna wait a bit longer before making this change. Obviously, the Razor Rock (or is Rock Razor?) original knobs still have a few more kilometres in them. You can see (pics) how some of the rubber has given way–especially on the rear tire. I suppose that’s the deal with riding off-road tires on pavement for around sixty-percent of the time. And even though I’ve gotten a kick out of the Rock Razor’s over the past two and half years, something’s been telling me for a while that it’s time to switch-up to something more street friendly–but not totally street. And get this. I’ve been running the same Rock Razor front tire for 8000km–or since purchasing this mega-e-bike. I was on a second rear tire.

With these new tires I can actually hear myself think when I’m riding. That is, compared to the Razor Rocks, I don’t hear the tires at all. What a change that’s gonna make, eh. Maybe I can even hear that car sneaking up around the corner to run me over–you know, on account, car drivers are starting to hate bikers occupying former car lanes that are now labelled bike-lanes. Fcuk you car drivers! ;-) The only noise I have to deal with now is that whining motor and the new, somewhat thicker, more e-bike chain, including new front and rear sprockets, I had installed a few months back. Most of the chain noise, I’m guessing, comes from the derailleur now as it’s original and mechanic said it didn’t need changing.

There is still a lot more riding before making any definitive conclusions here but after a 40km jaunt this morning, including about 10km of trails, I’m won-over by the handling of these tires. The Charger GX is almost a different bike. I reckon it’s more comparable to a Charger GT. As far as grip goes, on the trails I tried a few steep, grassy and rugged hills. My biggest concern is that there’s no side-grip with these balloon tires. The Rock Razors were excellent with side-grip. But the Super Moto-X’s held up well. Will take a mountain/enduro tour soon, which I’m sure will reveal more.

These tires are rated to hold anywhere from 2-4 bar and I’m running them at 3 right now and they are pretty stiff. But they are also much more forgiving than the Rock Razors. One of the biggest problems with the Rock Razor knobs was that they were horrifically stiff at 3.5 bar on pavement. I tried them once at about 2.5bar but they were all wishy-washy and gave off no confidence. Not much versatility in the Rock Razors, they are definitely off-road tires. Maybe they should just label them: hard as h-e-double-toothpicks.

I suppose, in a way, I’m urbanising this bike. I’ve already removed that silly front rack that was basically worthless for anything 3kg and above or anything that wasn’t soft, i.e. a rolled up sleeping bag, tent, etc. Which brings me to…

The change lurking in the wings, which will add to urbanisation, is shortening the handlebars. I plan on simply cutting off 2-3cm, maybe a tick more, on each end and thereby taking away some of the width of the bars. They really are wide, even on the trails. On some rides I’ve had to get off the bike to fit it through tight spaces. I just have to gather up the courage to do the destructive sawing to the bars. I really love all the parts on this bike–and now I gotta take a saw to it? Ugh. Oh well.

All in all, I should have put these tires on a long time ago. Looking forward to another year of great riding, though. For next year, dear worst-rider, a new mega-e-bike might materialise. But which one? And can I seriously give up this Charger? I really dig this thing. Yeah. Ugh.

Anywho. Consume to survive, baby. And…