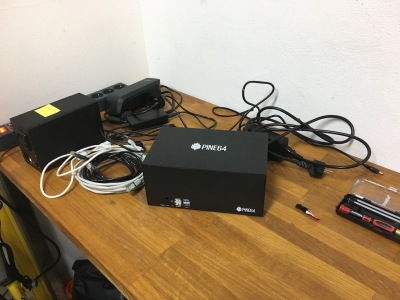 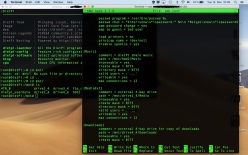 This is kind of an update to here and maybe here.

This is also kind of a battle, dear worst-reader. If you haven’t worst-guessed by now, it’s between worst-moi, Raspberry Pi and Pine64–all at the level of SBCs, baby. That is, for the moment, Pine64 is winning my non-NAS NAS competition. Or. How does one build a solid home digital storage thingy without having to buy one of them overpriced and over complicated glorified HDD enclosures, aka Synology, Drobo, etc., that suck bat balls? And so…

At the least, dear worst-reader, I’ve surpassed yet another threshold (or is it milestone?) of success-failure in my quest to avoid the NAS industry. You know, avoid paying stupid money to those over-rated, under-powered hard-drive bays that somehow have their own operating system and are only accessible via SSH where storing large amounts of old school data have become the bugs and whistles of gimme-gotcha. Oh wait. I’m getting kind of redundant. Move on.

The original worst-idear was to have a place for all my digital files but get rid of all the old hardware and thereby rely on Raspberry Pi. At the same confused time, I wanted to rid myself of the complication of GUI based NAS krapp, don’t you know. The only problem is, once you start transferring data, especially terabytes of data, the greatness of the R-Pi… bogs down real, real quick. That’s not to say I’m outta love for/with R-Pi. Currently the two (out of three) R-Pi’s I have running are clients for media–and they work great. For a while there I thought my taking a chance with Pine64 might not pay off on account I couldn’t get either the Rock64 or RockPro64 to do what I was hoping they’d do–as in, you know, work great like R-Pi. And then came the R-Pi4 with its faster data transfer speeds. Oh my. Moving on.

I knew by 2016-2017, in order for worst-moi to build a non-NAS NAS, gigabyte ethernet is the key. Lo and behold, R-Pi finally came out with worthwhile ethernet speeds but I’m still waiting for them to work out the kinks R-Pi4. Of course, I’d already bought into Pine64 and their SBC offering, naively unaware of software issues. Indeed. If only software would work on Pine64–managed by novice computer geeks. And so. The other day, after painstaking lazy-learning more and more about DietPi, I finally figured out how to set up not only the internal HDDs of my Pine64 NAS case but also an external drive bay (see pic above) that houses four of my old drives.

The result is I’m tickled to death. Not only does the Pine64 RockPro64 finally rock my world as a Plex media server but it’s also a great and simple Samba server with those four drives–add to that it’s got USB3! Now I can access all those old drives on my home network–with speed, baby. For shits & giggles, to test USB3, I copied my Music file library from the internal HDDs of the Pine64 NAS case to one of the drives in the external 4-bay case. Just under 1TB of data was copied in about 40min. That’s pretty good considering the same via R-Pi and USB2 would take almost a half a day. For the first time since fiddling with SBC as a replacement for all my old hardware (Macs, which I sold in January of 2019), I’m finally out of the world of PCs as trucks. Hardware in my digital world is now down to a few devices plus a great and so far stable cheap digital storage solution, including a great media server. Yeah, I’m tickled to death.

Since I’m a novice computer geek, I should also add that it’s taken me most of 2019, on and off, to be able to setup this system. Keep in mind, part of that time has been waiting patiently for a stable version of OMV for the RockPro64. But I’ve been shit-outta-luck, don’t you know. Even the Rock64, the RockPro64’s little SBC brother, doesn’t have what I would consider a stable version of OMV. So while I was hacking around with trying to get OMV to work on the RockPro64, in the interim I always relied on R-Pi and OMV to access all my drives. But. Again. The data transfer speeds were/are awful. Anywho.

The only stable software (system) I’ve got to work on the RockPro64 has been DietPi. Granted, I’ve only tried OMV and DietPi, although once I tried a Ubuntu but felt as though it was too much (as in: too much software). Also. Half the effort of getting DietPi to work has been relearning the CLI (command line interface). Indeed. Even after all these months, I’m still reliant on the google-machine to be able to do anything CLI. Yet I’ve avoided any graphical interface access like the plague. Again, that has something to do with SBC minimalism, I suppose, which I’ve kinda enjoyed since discovering R-Pi so many years ago. Aynwho.

Plex media server setup is a piece of cake because once installed, you access it using a web interface. I’ve been running Plex for about six months now and it’s worked without flaw. I have had issues requiring a restart of my R-Pi Plex client, though. But that’s no big deal. The real challenge came with setting up and configuring Samba shares for network access. Here I needed to access a share (a folder on a drive) with my R-Pi and Hifiberry Amp+2, which is currently my favourite audio player. The more and more I fiddled with this, the more convinced I became that OMV was probably not going to be necessary after all. I finally had hardware with fast networking capability but I could never get OMV to work properly on the Pine64 devices. I’m sure that has something to do with the software not getting out of beta, as indicated here. Back to Samba.

Even though I was able to setup one Samba share, I couldn’t figure out how to add more shares. My hat is off to DietPi for making this so simple–even though I spent countless hours trying to get the configuration code in the smb.confg file right. A break through came the other day once I figured out that all I had to do was copy and paste the [Share] code in the smb.confg file and then just add the correct [path =] and a new name. Boom, baby!

Now that I’ve got network access to my entire system with much better data transfer speeds, I’m no longer interested in the complexity of OMV. I certainly didn’t see that one coming. I really thought OMV would be the one compromise I’d have to make to my non-NAS NAS digital storage solution. You know, since OMV is pretty much NAS software. Again. Anywho.