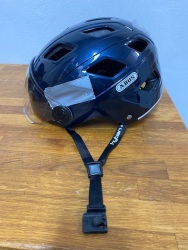 Perhaps some of you are too young to know. So allow worst-writer to explain yet another worst-title. In the movie Night On Earth by Jim Jarmusch a really bad taxi driver from the (then) recent former East Germany picks up a New Yorker in New York City and his name is Yo-Yo. While these two drive around NYC and have what Jarmusch portrays as the time of their lives, they also try to figure out their names. That is, Yo-Yo can’t understand the difference between the name Helmut and a helmet, i.e. protective gear one may or may not wear on ones head. Helmut thinks Yo-yo was named after a child’s toy. #Nomatter. The audience is given one of the best comic duos in cinematic history that is only comparable to Abbot and Costello. If you haven’t seen it (the whole movie), give it a look, dear worst-reader. Boy do I miss the days when movies were made like that. You know, creative movies. Works of art. Etc. That worst-said…

Late last summer during what I consider to be the worst bike riding year of my worst-life, I decided I needed to do something about being a bespectacled bike rider. Or have you never been there, dear worst-reader? You know. You’re cruising along and you know it’s eventually coming, and then it does, and suddenly you’re riding through nature as it unleashes rain rain rain rain. #Nomatter what you do, your standard and/or traditional bike helmet (or even hat) won’t/can’t protect your eyewear from being covered in rain drops. And so, when you arrive at your destination, which in my case is usually an out-door market where I gather fresh veggies and sometimes fresh hunted pheasant (from Guido the French/German pheasant hunter), everyone (including Guido) would stare at me with sympathy as they could see the misery in my blurred, foggy, soaked glasses face.

And so. I decided then and there it was time to take action (which usually means spend money) on one of them new fancy bike helmets that includes a visor. Being the cheap-skate that I am, though, I searched for days both online and in a bike store here or there for a consume-to-survive product that fit my budget. Since this was my first helmet with a visor for bike riding, I wasn’t really sure what I was looking for. Hence, this is the moment where corporate branding comes into play and a bit of online research can help–or not. As you can see (pics above), I decided for the another Abus branded helmet1.

Here’s my visor helmet buying advice short and sweet: steer clear from this one.

Don’t get me wrong. It’s obviously a good helmet. It’s well made, it’s very sturdy and exudes safety, and, I guess, it’s practical. With that in mind, here’s why I wouldn’t buy it again and only recommend it with the following thoughts:

The good news is, even though I wouldn’t buy it again and all of my complaints have not motivated me to send it back, the adjustable visor perfectly protects my glasses from not only rain but also cold wind. And that’s a big deal, don’t you know. It’s a big deal on account, at my age (pushing sixty, bitch!), cold air constantly blowing in my eyes can be quite irritating. Oh. And. I bought the friggin’ thing discounted, about 80-,€. It’s retail price was well over 100,-€ (at the time). What a bargain, eh. (Sarcasm off.)

The main problem with this helmet is the airflow along with its weight and size. When riding it feels as though cold air is being directed to my inner ear. Also, because of airflow, it’s friggin’ loud. This winter I’ve been riding with ear plugs plus a heavy skull cap that covers both my ears. Since I ordered the largest (size) helmet, I can fit quite a bit underneath it. But. Again. That makes it large and bulky. It does have an easy adjuster for fitting and/or tightening it to fit your head. The visor is easily adjustable too but airflow is influenced whether it’s up or down–again, making it either loud or louder when riding. Luckily adjusting the visor is no problem, even when using only one hand, i.e while riding. In warm weather the helmet is hot, and when it’s cold, well, you get the picture.

Is it well made? Yes. Does the safety light on the back work? Yes. Is it safe? I guess it is–if not for the weird, cumbersome chin strap. But at this point, the only reason I wear it, needed it, is because it’s been raining for months and months and months. Not a day goes by that I have to ride and it’s not raining–since friggin October of last year. And so. The only thing good about this helmet is that it’s great for protecting my glasses/eyes from the weather.

PS. Yes. According to the pics above, I voted in the Democratic primary via Democrats Abroad of my beloved & missed united mistakes of #Americant. As a former Democrat, and considering the direction THE LAND OF FREE TO BE STUPID has done since, gee, I don’t know, the end of the cold war, Bush and his wars of choice and, now, of course, President Stupid with the pee-pee hair, I thought it appropriate if I voted for a democratic socialist that might turn #Americant socialism for the rich into a bit of socialism for the down-trodden. Since it’s becoming more and more obvious that Bernie ain’t gonna get the nomination, I’m still glad I participated. Or maybe not. Oh well. Rant on, baby.