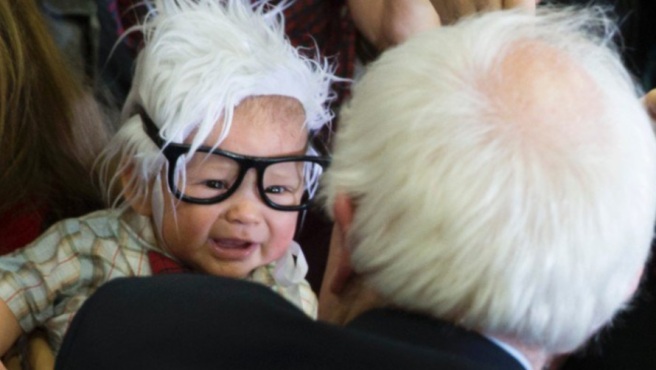 Well, dear worst-reader, it’s finally happened. Bernie Sanders has not only exited the 2016 presidential race (Yes!, the 2016 race) but he’s joined all the others–including Hillary–who probably never should have been in the race in the first place. So let’s go down the list shall we? Here’s what shouldn’t be running for the highest office of the LAND OF FREE TO BE STUPID: women, non-whites, gays, young people, and, of course, Jews. And so. Just as the Talking Head song says, here’s where we are: Same as it ever was. Same as it ever was. Saaaaaame as it eeeeeeeeever waaaaaaas!

What’s left then for the rest of us who at least try to participate in pseudo-democracy and money-life? Indeed. Not only old, white guys continue to run the $hitshow of greed that is my beloved & missed united mistakes of #Americant, but it even feels like there is nothing or no one else to ever replace those who gave us this $hitshow. I mean. Forget about the gender thing, the race thing, the religious krapp that may or may not reveal what #Americant really is. The problem is, there’s not even a young, straight, handsome white guy–a guy under the age of fifty–out there to take the reins of a future that is long since a dead-man walking that looks like 90-year-old Biden fishing through #Trump’s hair as though he thinks he were a kid in the Wonka factory dipping his finger in a world of confectionary everything. But on that note… I die-gress.

Here’s the thing, dear worst-reader. If you’re still in the LAND OF FREE TO BE STUPID–as I managed to get out of over thirty years ago–I wish you the best of luck in your fight against STUPID. For the moneyed and old abusers who know STUPID better than STUPID knows STUPID… will continue to rule because, well, what else is there left that they can take from the youth they haven’t already taken, i.e. the future? You and your parents (aka #okboomers) have made and sustained and facilitated the $hitshow–but they/you were too stupid to figure that out as lapel-flag, faux-newz patriotism has been ruling them/you since… Gee. I don’t know. Ronald Fcuking Reagan. And so. It’s worked out enough for you to never own a car–but you certainly know its monthly payments. You’ll never pay-off a mortgage (like some of your #okboomer parents were able to) but you’ll re-finance whatever it is you have to buy a pool or a boat or a Harley, etc.–that you’ll also never pay-off. Consume-to-survive everything with revolving credit until a slime of greed oozes out of your nostrils that you mistake for money as the delirium of Coronavirus engulfs you and… But. Again. I die-gress.

These old white guys truly believe that they are God’s gift to man, #nomatter if their hair looks like slush-ice made of urine–and in Bidens case platinum urine taken from the last female unicorn that ever walked over a man’s cock. Or. Of course. They walk around like Biden does as though he were literally being pulled along by a harness attached to his ever bitter woman-wife that is (can only be) the matriarch of these fail-upward men of forever nothingness. Another die-gress?

And so. Democrats are ramming it down your throats, dear worst-reader. They are doing it to finally show you that there is a difference between them and the religious $hitbags of the Republican party that have turned the $hitshow into a greed-feast of nevermore. You think Democrats forgot how you DID NOT vote for Hillary? They are so pissed that you gave them #Trump their only concern at this point is making sure he doesn’t ruin Republicans too much. Even if Biden loses, don’t you know, the elites of the Democrat party are going to do what all elites do. They are going to laugh their way to the bank as #Trump suckers (#MAGA) you out of even more. And that more doesn’t include Democrat elites. Indeed. Your democracy allows you to still pick you enemies even if you can’t pick the winners of your anal-unicorn-party-time you so lust for ontop of reality TV, WWE, and, and, and. So pucker up suckers.

Even though Bernie Sanders is no spring chicken and he’s a bit white-white, his idears were as young as it gets when considering the old-ness #Americant has become lusting for money plus more and more and more FREEDOM TO BE STUPID. On the other worst-hand, why should Biden and his generation even consider all the failure they are leaving behind? Don’t they all believe that they represent that which has given the world not only cheap toasters made in sweat-shops but also the freedom to get stupider and stupider, hence all the reality-TV and the reality of WWE? And let’s not forget the stupid that is WWE or religion that can only culminate in the likes of #Trump. Hence, why shouldn’t #Trump win re-election? Indeed. The $hitshow of greed will continue for it is, dear worst-reader, a hard and heavy and stubborn beast that thinks it never deserves to die.