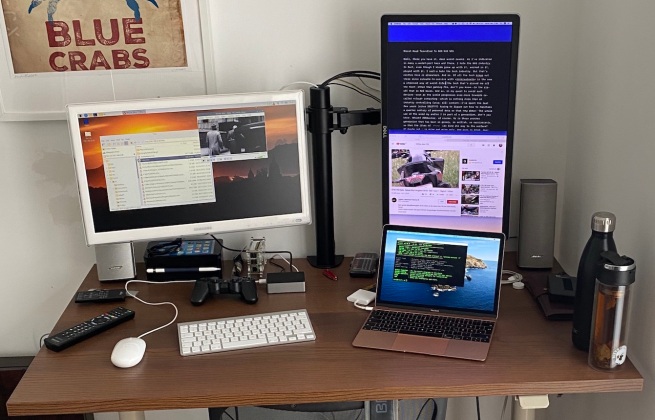 In worst-writer’s quest to eventually (when exactly?) dump MacOS, I’ve been dabbling in Linux for quite some time. The problem, of course, is that I’m a very slow learner. Add to that the relative slowness of previous RPi’s, I’ve not yet felt comfortable with Rasbian or any other Linux distro on the RPI3, with the exception of Dietpi, but that’s not really a desktop option. Besides, as we all know, eh dear worst-reader, there’s no place in this worst-world for slow learners or pure CLI. Hence I am worst-writer and I’m destined to live as such–slow CPU here or there albeit with a desktop environment. And so. Since Windows is out of the question, the alternative OS for worst-moi can only be Linux with a fancy desktop distro. My only regret with facing such a reality is that I have to wait till my current MacBook is ready for the dung-heap before making the change. The laptops from System76 are looking pretty right now. Reason for the wait, though, is simple: that fcuking pink MacBook was fcuking expensive and to make matters worst it fcuking works great as a worst-writer daily driver, USB-C dongle or not. I’m mean, it is one of Apple’s smallest and weakest computers. Yet I love the thing, krappy keyboard n’all. And for fourteen hundred painful Euros… I can’t believe I paid that much for such an underpowered device. What’s wrong with me? Goo-goo, ga-ga. Bling, bling. Anywho.

The reason I’m eventually (when exactly?) changing to Linux is the open question of the day, of course. What’s clear is that I’m really NOT interested in paying the über high price for Macs anymore. Considering how the company is going full iOS, plus the Apple tax, i.e. the made-up cost (arbitrary) of Apple + intel that is bordering on STUPID, when considering the power and usability of something as cheap as an RPi (ARM processors), it all only reminds me that the whole industry is, not unlike #Trump and the LAND OF FREE TO BE STUPID, waaaaaaaaaay out of whack. And as we all know, I’ll tolerate an iPad as a hand-me-down from my wife for viewing media and reading digital books but boy oh boy do I hate touch screen computing–and I’ll never (in this case never say never may or may not apply) buy another iPad for as long as worst-live. But let’s not get tied up on the tablet thing and me making promises worst-writer might not be able to keep, eh.

As you can see in the pic above, I’m currently running my Mac world on the right side of my desk and on the left my new RPi4 world. Since I’m also not ready to splurge on a new monitor, I’m using an old TV that has two HDMI ports as my RPi monitor. And although a TV is not a computer monitor, this one works pretty good on account it’s desktop small. At the least, it’s good enough for fiddling around with Raspbian-Linux (a Debian distro). To my surprise, even after only using it for a few weeks, the whole desk setup, including those new infancy monitor arms, works pretty good. Considering I didn’t have to buy a new keyboard for the RPi4, which I thought I’d have to do to use two computers systems on one desk, the setup is looking even cooler. My old Apple keyboard and mouse work just fine on the RPi4. As you’ll note in the pic above, there is also a second RPi, an RPi3b+, that I’m currently using as a retro game tester, which is plugged into the TV’s second HDMI port. I did splurge on a cheap knock-off PS3 controller for that one, though. I may or may not post something regarding RPi retro gaming but that’ll have to wait since I’m still trying to figure out how it works.

As far as desktop setup and duel monitor arms, I splurged on a you-know-who Basics offering. Although there is no vertical movement of the monitor arms, you can easily adjust height via the centre poll. It’s all not as uppity and fancy as those more expensive arms that seem to float in the air but I suppose that’s the reason this one only cost 35,-€. And since I can rotate my Dell monitor 90° when needed, as I sometimes use it in portrait mode when working on longer draft worst-writing, this is all über-good, baby.

Yes. All in all this is a cool desktop solution for lots of worst-writing, including lots of continued worst-writing procrastination. Combined with my Ikea height adjustable desk, I should be good till the next urge to consume-to-survive hits and I have to buy something else that I don’t really need but is, well, cool. Speaiing of consuming things needed (or not), I’m really digging the idear of getting back into motorcycling. Maybe this year I’ll be able to worst-post something about getting back on two (powered) wheels again. Or maybe not.