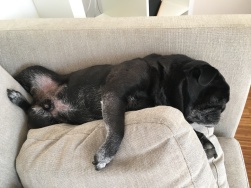 As stated in this previous post, dear worst-rider, I’ve been urbanising my hardtail electric mountain bike. Reason? I’m getting too old? No? How about: I’m too fat? Na, that’s not good. How about this one: It’s time to move on? Yeah, let’s go with that one.

After 8000km and a second rear tire, I replaced the original razor rock (rock razor?) knob mountain bike tires with something a bit more comfortable–AND quiet. I also trimmed those extra wide handlebars that I never liked in the first place. I cut off about 2cm on each side and boy does it make a difference. Getting the bike out of my basement is much easier now with the somewhat less-wide bars. The new width is also a more conducive to my riding style. Also. As worst-posted here, I had new chain and sprockets installed at around 7000km. Which brings me to the gist of this worst-post.

After changing tires to Schwalbe Super Moto-X, the first thing I noticed about the bike was how quiet it had become–except for the chain. Other than the whining motor, and according to the mechanic who installed it, I thought it would take a few KMs before the chain would break-in and I just had to deal with the noise till then. But then five-hundred KMs rolled around and the chain was still loud. Then came a thousand KMs and and the excessive chain noise never subsided.

The other morning I took it upon my worst-riding self to give the derailleur a good cleaning, thinking that might be the reason it was so loud. I also wanted to have a look to see if, perhaps, the chain wasn’t the proper size. Of course, the thought ran through my head that maybe, just maybe, the mechanic screwed the pooch with this chain. Remember, the mechanic did inform me that the chain was a bit different than the original chain. He said it was an e-bike chain, don’t you know. Indeed.

During cleaning I removed the pulleys from the lower pivot of the derailleur and gave them a good once-over, replacing them exactly as I removed them. With a soft brush and WD-40 I cleaned out the upper part of the derailleur, as well. I then gave the chain a good wiping. Although there were a few moments of confusion reassembling the now cleaned derailleur–whereupon I relied on a quick check on the interwebnets to make sure I was doing it right–I was able to get it all back together. At least so I thought. I then took the bike out for a quick test ride. And guess what? It was just as loud as ever.

For a while there I thought I might have gotten myself into a bit of a mess on account I hadn’t fiddled with the innards of a derailleur for sometime. It is a rather complex component on an otherwise simple device. And that’s all fine & dandy. The only problem is, for the life of me, I couldn’t figure out where on the chain all the noise was coming from when I peddled the bike. Remember, even though the bike was a lot quieter since changing tires, the majority of noise coming from it now was that damn chain, derailleur, sprockets, etc.

Frustrated I jumped on my über-e-bike and headed to my favourite mechanic in the city. When I pointed out the situation, he recalling that they changed the chain in April, he then took one quick look and grabbed my bike and passed it on to a mechanic. The mechanic raised it up on his hydraulic rack. He unscrewed the lower pulley, removed it, separated the pulley mount, put the chain in the proper position through the mount, and then reinstalled the lower pulley. I watched him do this and at the same time my jaw continuously fell to the floor like the low fruit of a society that can only yield its mindlessness to the likes of idiot politics and #Trump. (Giddy w/laugh.)

Wait a sec, I thought. I’ve had this problem for over a 1000km, since THEY changed the chain and sprockets in April. It only became prominent when I changed tires and got rid of that obnoxious mountain bike tire sound. The mechanic was assuming that I didn’t put the derailleur back tougher properly when in fact his colleague–back in April!–most likely did the faux pas. Yeah, what a stunner (sarcasm off). As usual I now have one more reason to give up on these bike mechanics and bike shops. If only I weren’t so lazy and able to afford their errors, eh.

The ride home that afternoon was the quietest I’ve ever experienced on my über e-bike. The thing is as silent as it’s gonna get. Unless, of course, Bosch comes up with a system update that takes that whine out of the motor. But I’m not counting on that one.